One of the most enigmatic passages in the Torah is the famous struggle between Yaakov and the angel; Yaakov, on the night before his fateful encounter with his brother is seemingly attacked by an angel. This nocturnal struggle has been painted through the ages, mostly by Christian artists, all depicting a wrestling match between Yaakov and a winged-being. However, Rembrandt, the famous 17th century Dutch painter, depicts the angel, not as fighting, but in an almost loving embrace. The angel seems to be supporting a failing Yaakov, not trying to overcome him. 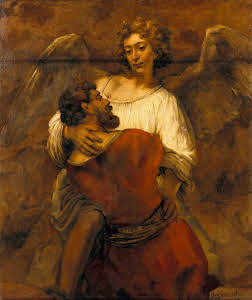 This imagery is very much in line with a number of our classical commentators. The most well-known interpretation of this encounter, suggested by Rashi, has the angel representing Eisav and the battle is a foreshadowing of their encounter. However, Ibn Ezra suggests that the purpose of the encounter was to reassure Yaakov, to give him strength, to comfort him. Rembrandt’s depiction of the angel captures Ibn Ezra’s reading perfectly.

The implication of this approach is that Yaakov was in need of comforting. So scared, in fact, that Rashbam suggests that he had awoken that night not to continue marching towards Eisav, but to run away! Despite having come so far in his personal growth, despite the ability to face his father-in-law and rebuke him, despite his excellent three-pronged strategy to overcome Eisav, at this final moment, Yaakov was overwhelmed with fear and decided to flee! Ultimately, the angel’s reassurance works, and Yaakov turns around and confronts his greatest challenge (yet), reconciling with his estranged brother.

Before parting the angel gives Yaakov a new name, Yisrael, and he explains why: “Ki sarita (because you struggled) im Elohim v’adam (with angels and man) vatuchal (and you prevailed).” Interestingly, the final part of the sentence, Yaakov’s prevailing, is not reflected in his new name. Yisrael, is made up of only the first idea; sarita im Elohim – you struggled with great powers. Strangely, there is no mention of his ability to overcome.

It would seem that struggling is the essence of Yaakov’s new name and in turn the essence of our national identity as Am Yisrael. We are a nation that knows how to struggle. From our inception, we have struggled against external foes, sometimes prevailing but also sometimes losing. The victory of the Maccabees, which we will be celebrating this week, was far from decisive. The Maccabees won the battle, but they ultimately lost the war, as the Maccabean kingdom crumbled a few years after it was established.

When we find ourselves in such a battle, in the dark, without hope, without strength, let’s use the imagery of Rembrandt and imagine that angel, calm and reassuring, to remind us that although you and I may not see it, God, through His angels, is sending us the strength we need to continue with this battle. After all, our name is Yisrael; our greatness lies, not in victory, but in being willing to confront and to struggle.